Get smouldering as your pleasure tool(s) start to rise… And, exhale.

Citrusy orange nicely balanced with tangy hints of rhubarb spatially littered across this moist gluten-free Rhubarb and Orange Cake. You’ll be biting into mouthful upon mouthful of pure ecstasy.

This dish will demolish your belief that vegan food can’t be super tasty.

Rhubarb and Orange Cake was inspired by sipping tea gossiping with an ex-beau in stately Kenwood House in Hampstead Heath. Memories…

So, what exactly is rhubarb? Well, rhubarb is a dessert vegetable. Originally, native to China, it made its way to culinary British kitchens around the 1800s and has been a staple since. Once it takes root, it can be prolific. What’s amazing is that you can force rhubarb, that is by limiting the light that gets to it, prevent photosynthesis, and it will still grow – but grow giving these lush blanched-pink stems. Forcing is rhubarb is popular during the winter months when it dark outside.

Thank Marco Polo who’s attributed to originally importing this Rhubarb to the Europeans.  Not sure where we’d be without this sour-tasting veg.

Rhubarb and Orange Cake is vegan and gluten-free. 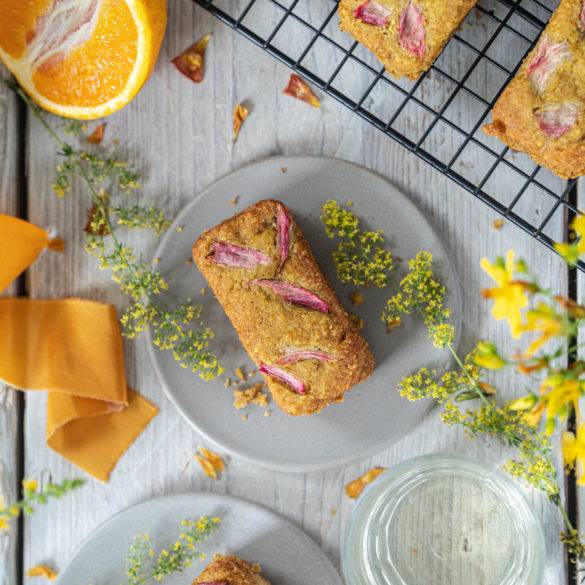