Gobble down something sweet and sensual that will pop in your mouth. And, roar.

This dish will burst your bubble that vegan food can’t be fulfilling.

Boozy Stewed Redcurrants Sultanas and Apples was inspired by school lunches sitting at the cafeteria yapping with mates.

Pearl sized redcurrants are berries huddled on elongated stems on small bushes. Handpicking them on your hands and knees is the way to forage them, preferably with a cushion underneath. With a healthy dose of vitamin C, the pulp tart flesh and edible seeds make a great pairing with other fruit, complementing sultanas and apples. Native to Europe and Asia, they’re fairly easy to grow, though you’ll need to wait for a couple of years until they bear fruit.  Make sure you cover your bush with netting, otherwise the birds will have’em before you know it.

Sultanas, otherwise known as golden raisins, made from certain varieties of seedless dried oval white games, darkening as they age.

Boozy Stewed Redcurrants Sultanas and Apples is vegan and paleo. 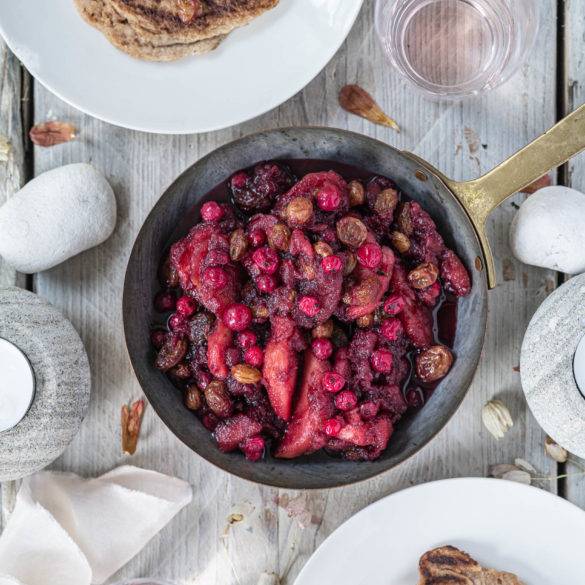