Gorge on some Italian sausage and enjoy the taste of something fleshy. And, chew.

This dish will shatter your belief that vegan food can’t deliver a vegan meat that’ll knock your socks off.

Vegan Mortadella was inspired by lunchtimes nipping out to the Italian deli queueing for freshly made sarnies.

This inspired original 16th Century luncheon meat used Myrtle berries, cinnamon, nutmeg, cloves, moss and salt. Back then black peppercorns hadn’t yet been imported to Europe from the East. Nowadays, peppercorns are commonly used instead.

To recreate this vegan version of Mortadella, I hunted far to find Myrtle berries stocked in London. It was slightly frantic as I’d promised Plant Based Mag that I’d produce a couple of Seitan dishes by the end of the weekend for one of their forthcoming issues.  Time wasn’t on my side.

Fortunately, I’d located a small Italian supplier who sold Myrtle berries, freshly sourced form a small organic farm in Sardinia.  Luckily too he was making a delivery to the Deli Downstairs in London Fields and so was able to collect these berries from him.

Here’s a shout out to Antonio.  He’s based in South London, and sells his artisan produce at markets and local speciality delis.

You can purchase Myrtle berries from him here

(I don’t get any kick back from the shout out but I support small suppliers where I can).

Myrtle berries have a dark blue skin having a juniper-peppery-rosemary taste. They’re native to the Mediterranean and best time to pick them in November.

Keep the leaves as I’ll be creating some recipes using those in future. Once open keep in a sealed container. You only need 10 for this recipe. So, a little goes a long way.

Vegan Mortadella is a special creation and one of my signature dishes. 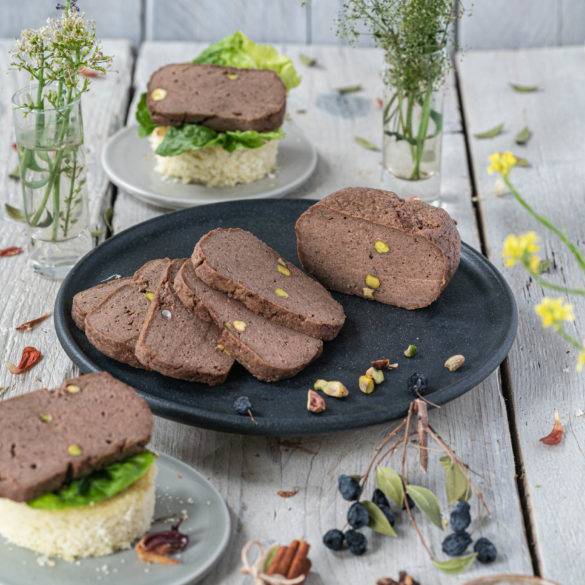