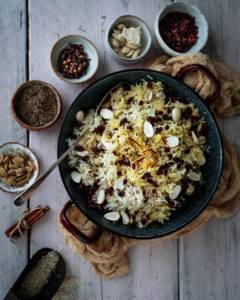 Save Print
Prep time
30 mins
Cook time
15 mins
Total time
45 mins
Barberry Pilaf Rice came about because I was experimenting with Indian and Persian foods. I was on an expedition as I ventured round Iranian and Middle Eastern grocers in London. I am inclined to soak the barberries in Marsala wine because I prefer not to have sugar mask the flavour of them – though, traditionally sugar is used to give that sweet and sour contrast. Also, traditionally, this dish uses onion, but I feel that detracts from the flavours and aromas of this dish. If you are unable to find barberries, try soaking raisins in Marsala wine with a little lemon juice. Repeat as below. I recently served this dish for a friend, who commented on the rice aromas of the dish; the incense of the cardamoms and cloves of India seeping through. The barberries have a very light (once soaked and steamed) and sour taste to them which contrasts with the fluffiness of the rice.
Author: Edward Daniel
Recipe type: Side
Cuisine: Vegan
Serves: 6
Ingredients
Instructions
3.5.3226

Hi I am Edward. I am the vegan chef, photographer and stylist behind these lush recipes. Please keep in touch.