Get your pecker to explode with flavours as you get this Five Spice into your orifice. And, quiver.

This dish will blow any doubts that vegan food is too difficult to conjure up.

My Five Spice recipe was conjured up when thoughts of shop brought didn’t cut it for particularly in the proportions that brought out the spices to perfection.

Cloves are an amazing natural anti-oxidant. Whereas the remaining ingredients pack in the aromas to this condiment. Often, referred to as Chinese Five Spice.

My own combo version uses more of the cinnamon and star anise and less of the Sichuan peppers and cloves which can be overpowering if used in larger quantities. comparatively. Well, that’s my personal view.

Chinese Five Spice is a blend of five spices traditionally used in Chinese cooking – forming the base for marinades, spice rub, braising and roasting. Aromatic and vegan it adds depth, warmth and complexity to dishes.  It’s an integral part of Chinese cuisine dating to Ancient China.  It’s essence is to be salty, sweet, sour, spicy and bitter – what more do you need to lift your dishes?

Five Spice is vegan and paleo. 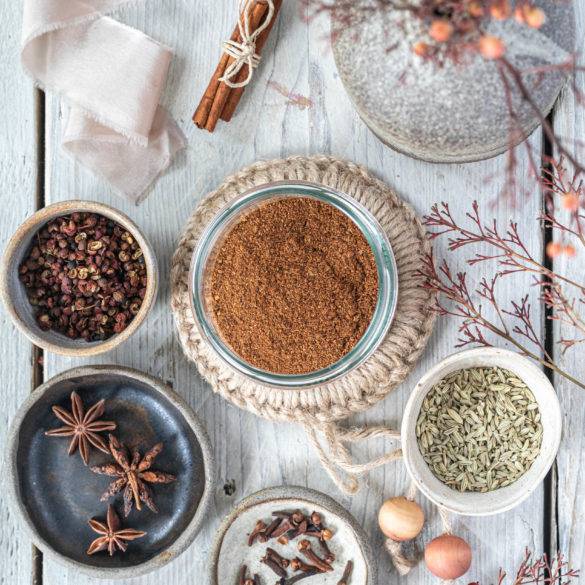