Get your gob around this tasty morsel and fire up all those receptor cells to the big O. And, Swallow.

Made from gamey Jackfruit, this lush Vegan Crispy Duck pools delux flavours of Five Spice, molasses and orange juice to give a kicking alt to this otherwise traditional mouth-watering dish.  Served on sheaths of pancakes layered with lashings of Spring onions, cucumbers and fragrant coriander leaves, drizzled with plum and hoisin sauces. You just can’t go wrong.

This dish will have your scrambling for more and will burst your bubble that vegan food can’t be super healthy.

Vegan Crispy Duck was inspired from sitting in a bustling restaurant in China Town, Soho, London as the sweet smell cinnamon, Star anise and nutmeg subsumed the atmosphere.

Ordinarily, tossed in an ebony wok with exotic Five Spices galore with a flick of the wrist, this Vegan Crispy Duck may not bear the accruements of the original non-vegan Peking Duck recipe. A far cry, indeed. But at least it is a little kinder; dehydration and the use of jackfruit instead, is a little kinder – and, even on that otherwise ever-expanding belt too.  You can even still go for those third and fourth helpings.

To boot and add sparkle to this dish, I have even made my own Five Spice combo found here. Check it out too. You can’t go wrong with Five Spice – which just elevates this vegan version to ever greater dizzier heights of yumminess. 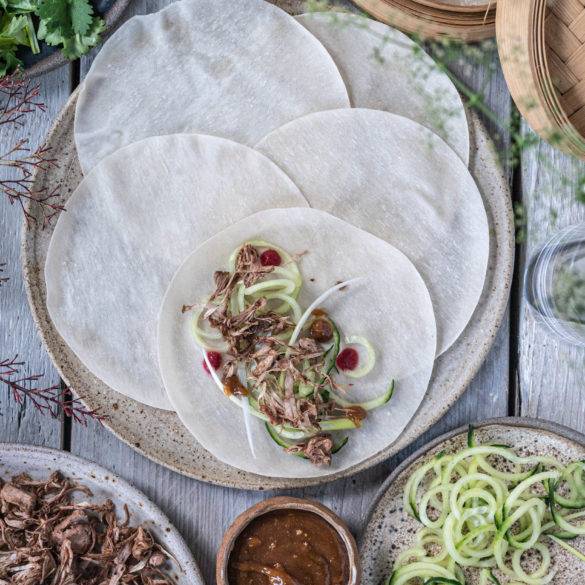