Gooseberry Pie? Who doesn’t love a bit of Gooseberry Pie? After binge watching “Bridgerton”, I was inspired to create my own Gooseberry Pie.  The gooseberries may be tart but melded with the almonds and orange and touch of Star Anise and cinnamon, I think this makes a fine combination and contrast – imagining what it might have been like in the Regency era. 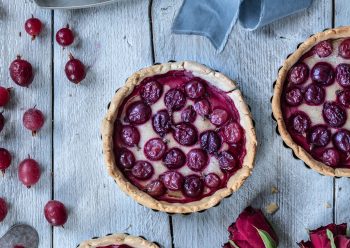