Indulge in a buttery exotic appetizer as you descend into pure heaven. And, cave in.

This dish will tear your belief that vegan food can’t be tasty.

Palestinian Pomegranate Pumpkin Seed Maftoul Salad was inspired by noshing in Lebanese restaurants in the Edgware quarter of London’s finest as the smell of hookah came wafting over.

Maftoul is a Palestinian grain, a giant couscous, made from cracked wheat and bulgur flour. It has a sophisticated nutty and chewy flavour to it. Unlike, couscous, it is however more forgiving, because even with a little too much broth or water, it retains its firm texture. Hand-rolled still today by mammas, it is dried under the blistering Palestinian sun, giving its pearl-sized golden colour.

Plump ruby jewelled succulent seeds, it is easy to understand why Pomegranate is otherwise known as the forbidden fruit that Eve enticed Adam… Native to Persia, Pomegranate’s has been cultivated in the Middle East, Asia and Mediterranean seasoning between September to November.

Pumpkin seeds are high in zinc, perfect for promoting that sperm count into action. Sprinkled over salads, they provide a crunchy contrast.

If you’re wondering about where to get your Maftoul, Maftoul can be sourced from Phoenicia Mediterranean Food Hall in quaint Kentish Town in London. 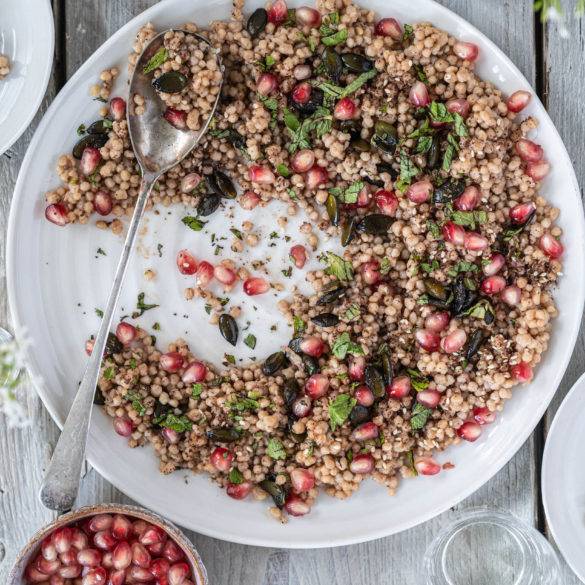