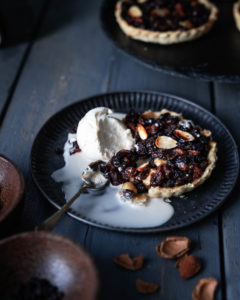 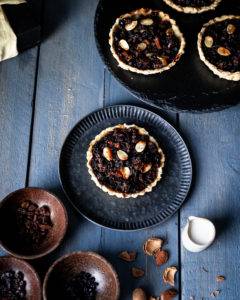 Save Print
Prep time
30 mins
Cook time
10 mins
Total time
40 mins
Traditional Mince Pies is a recipe that harps back to a bygone era. It has all the typical trimmings, including the mixed fruit and spices and a little bit of brandy. I love this dish because it is so rich with colour and texture. The crust is not traditional, I like to add oats to add a little texture to my pastry. I had to hold off from eating these pies as I was doing the photography. It is lush with some simple vanilla ice cream. This recipe will make about four medium flute tarts so you may or may not wish to double the recipe quantities if catering for more.
Author: Edward Daniel
Recipe type: Dessert, Tarts
Cuisine: Vegan
Serves: 4
Ingredients
Instructions
3.5.3226